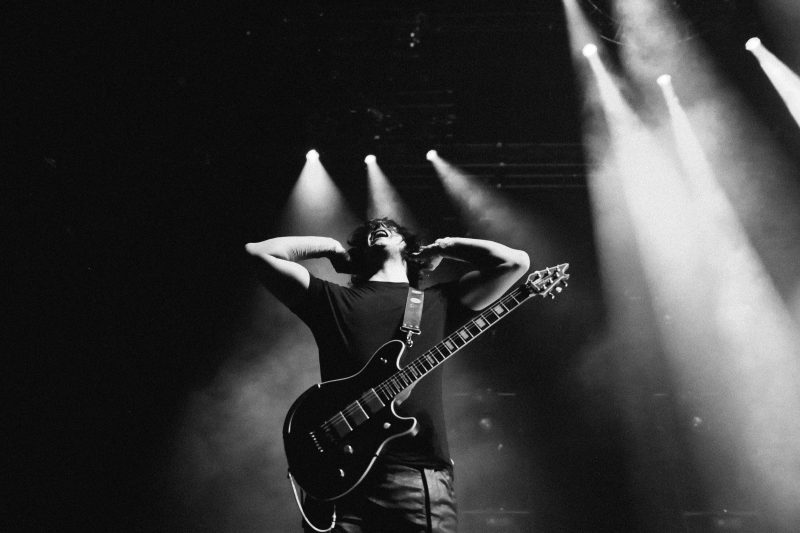 There it is, finally: the scientific explanation why I can never get sleep after attending a Jack White show. The internet tells me that „Blue light directly affects melatonin, the hormone known to induce sleep. In simpler words, blue light signals the mind that it is not the time to sleep yet“. Apart from that, blue light is also used in light therapy against depression. Sleepless and euphoric, yes! A scientific, physical reaction to the blue lighting that accompanies Jack White on stage.

Oh, and I thought it might be the music! All those songs, each one a part of the soundtrack of my life. Listening to them is like meeting old friends, some drop by more surprisingly than others. Or, speaking about friends, maybe my insomnia is also linked with the excitement I feel about meeting all those lovely people again, from France, the Netherlands, Poland, Slovenia… or this huge amount of energy that pours over us, the audience, every night. The most convincing theory is that it could be a combination of all that.

A couple of days before I travel to Warsaw for the second part of my personal Jack White „Boarding House Reach“ Tour I say to a friend: „It’s really time. It’s been too long.“ And she smirks at me: „Yeah, it’s been really too long“, weirdly emphasizing the „really“. Is she making fun of me? I am drop dead serious about it: it’s been far too long. „Fall is here, hear the yell…“ You know the words to that song. My soul and feet are fidgeting. Fall means: Warsaw – Berlin – Munich – Dortmund. I’ve never been to Warsaw, and that Berlin is part of this tour makes me extremely happy. It’s been more than six years since Jack has come to my hometown. But first, let’s start the madness and hop on a train to Warsaw.

Jack White has a special connection to Poland, as his mother and so he himself have Polish roots. He performed several times at the Open’er Festival in Gdynia, with all of his bands (The White Stripes, The Dead Weather and The Raconteurs) as well as solo, and each of these shows is supposed to be legendary. In London, two kind ladies from the Polish Jack White Fanclub explained to me how the Polish ticket system works, and that was basically it. Hello, Warsaw! 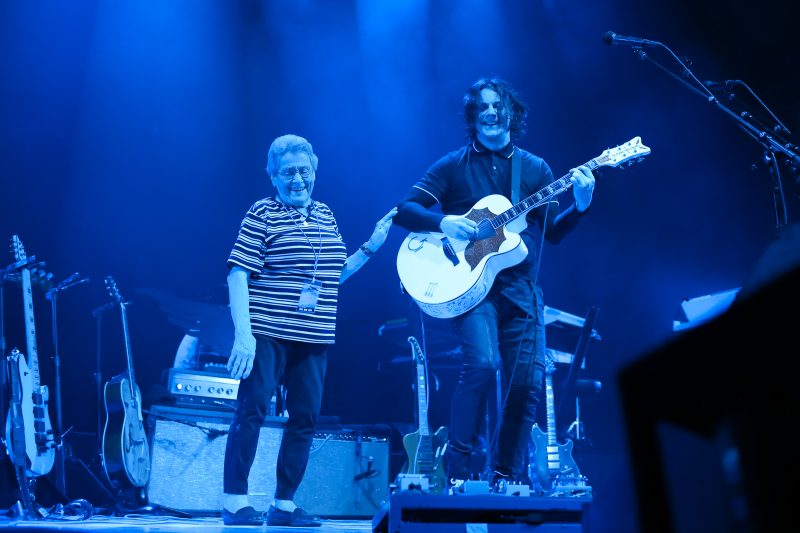 And, what can I say? It was a blast. Warsaw is bright and sunny, Jack again at his best. As a special guest, he brings along his mother, Teresa Gillis, who celebrated her 88th birthday the day before the show. During the show, she’s got a special seat next to the guitar technician (Guitar Guy! Who remembers?) and at one point, Jack brings her out on stage to have the crowd sing a Polish birthday song to her. It’s called „Sto Lat“ and basically everyone in the audience knows how to sing it, except for the two Germans in the front row. But we do our best to pretend and just enjoy this very special moment. Jack also dedicates her favorite song „Apple Blossom“ to her and changes the last line to: „I think I’ll marry a girl like you.“ Please, cry now.

Apart from that, the Polish crowd is really special, enthusiastic, engaged, but not aggressive. They simply love Jack, and he loves them back. Meanwhile, Teresa Gillis is sitting on the side of the stage, nodding her head to the rhythm of the songs she likes. She gets up to dance a slow dance to „Humoresque“ and claps her hands along with everybody to „Seven Nation Army“. It is obvious that she is more into the melodic tunes, when it gets loud she follows the happenings with a strict look. But that doesn’t keep her son from doing his thing – as the youngest of ten kids, he probably learned that quite early. 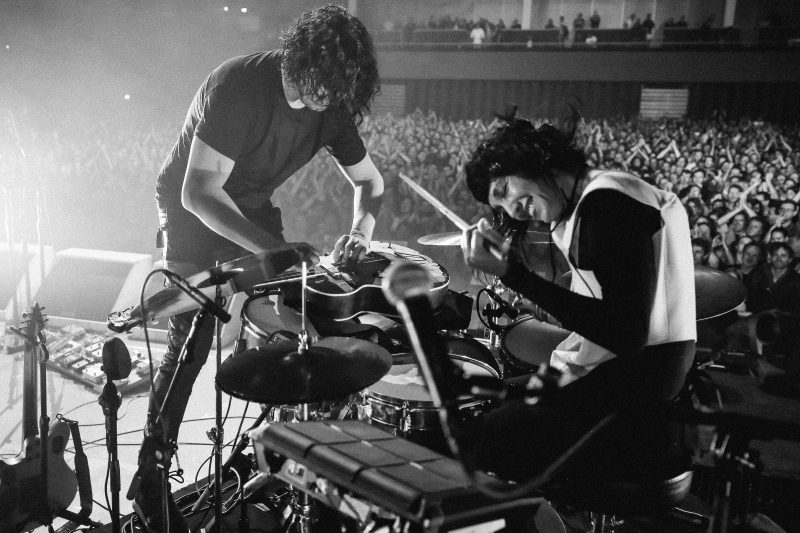 Two days later: Berlin! I don’t have to hop on a train or plane. For once, Jack is basically delivered to my doorstep. Believe it or not, I am nervous. I have seen him perform in such great venues now, like the L’Olympia in Paris and the Eventim Apollo in London – how will he like it here? Especially as he received the strange honor of being the first to perform in the newly built Verti Music Hall. What a strange place! A venue without the least bit of charm, you can do such strange things as buying nachos and popcorn there (for a short moment, I make myself laugh by imagining what would happen if someone handed me a bag of popcorn during a Jack White show). So it makes me even happier to see that Jack doesn’t seem to give a fuck about this strange, multipurpose hall atmosphere and just puts on an amazing show. It takes a bit of time for him and the rather laid back Berliners to really get into each other, but then it just gets better and better. And his choice of songs is perfect that night! Apart from that, it is a very special evening to me, filled with love and friendship. Even my husband, who normally prefers to watch a show from a relaxed spot sipping a beer, raises his hands up in the air next to me. That really is something.

How do you keep up this energy? I might be getting old, but my legs are trembling a bit the next evening in Munich. And even Jack appears a bit more laid back that night. But the audience works strongly against that, 6000 people have shown up to the sold out Zenith, the biggest crowd in Germany and also the most energetic. Sometimes it is even too much, the way they are pushing and shoving – Munich is pretty serious about Rock’n Roll. The show is a bit shorter than in Berlin, in the end the difference concerning the energy is tiny. Jack is dressed up neatly in shirt, tie and suspenders, and also for the last night of the German tour in Dortmund he wears one of his best suits. Compared to the other venues, the show at the Warsteiner Music Hall appears almost like a club show. The stage is so small that the piano and the second drum kit are missing, due to lack of space. But according to experience, Jack White likes small stages, and he puts on some surprises that night, like for example opening the show with a really old White Stripes song, „When I Hear My Name“. That seems to help him get over the fact that the Dortmund crowd mainly appears to be waiting for him to play „Seven Nation Army“. During the final applause, drummer Carla Azar seems to be holding back her tears, and also Jack himself appears to be moved. It looks like he had a good time in Germany. 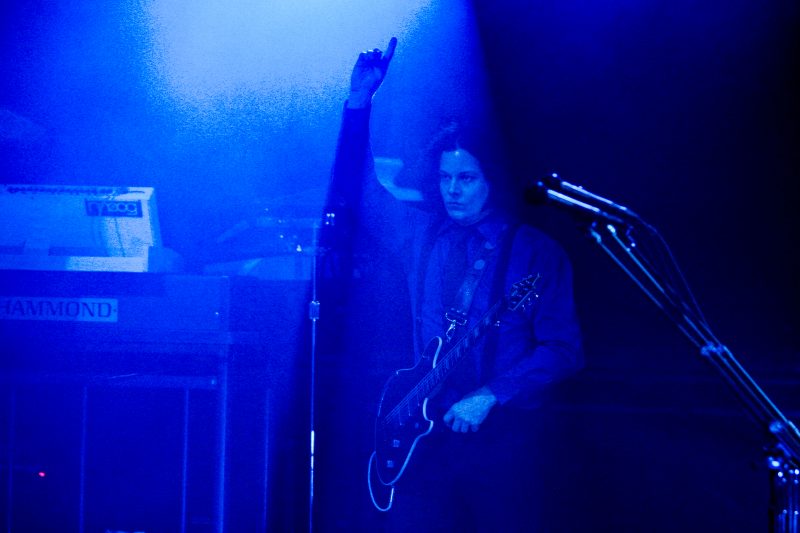 And then it is over. I am traveling back to Berlin. On the train, I get a message from my friend from Paris, the one who in the summer attended every show bravely wearing flip-flops and during the last days danced in her boots until she got blisters:

„Yesterday, as you were with Jack, I was just waiting. In the plane. In front of Paris Airport. For 20 minutes. Because the guy who was supposed to put the bridge between the plane and the airport was…not there. They couldn’t find him. Imagine Jack White waiting on stage. For 20 minutes. For his guitars. Because guitar guy is… not there.“

I start laughing out loud. You could not nail it better, the energy, the power and the tempo of a Jack White show. It’s a fact: I have rarely seen Jack so on top of his game as during this tour. But it is also his current band (Dominic Davis on bass, Quincy McCrary and Neal Evans on the keys and Carla Azar on drums), who contributes so much to the greatness of these shows. Some of his songs never sounded that good live. And oh my gosh, how many of them were played, and in how many different versions! „We’re Going To Be Friends“ for example, I heard in at least three different versions. The combination of concentration and permeability this band puts on is simply unique. Apart from that, all four musicians have strong, autonomous personalities too. They are so much more than just a backing band.

But it is also much more than artistic perfection that made every single show so special. The same friend who made me laugh out loud with her message, two days prior, sat next to me on the train to Munich, when that thought popped up in my head. Why I feel so blessed these days, so fulfilled, so happy and so sentimental at the same time: „I think Jack White is the  living artist that makes it most bearable to me that Prince died“, I said. We sat on that shitty ICE, high on sleep deprivation, love and music, and we started to cry. And we were not ashamed of it. While people around us were simply traveling from A to B, while the world went on turning, we decided to stay a bit longer in our crazy, beautiful, blue bubble. What can I say? We really, really love it there. 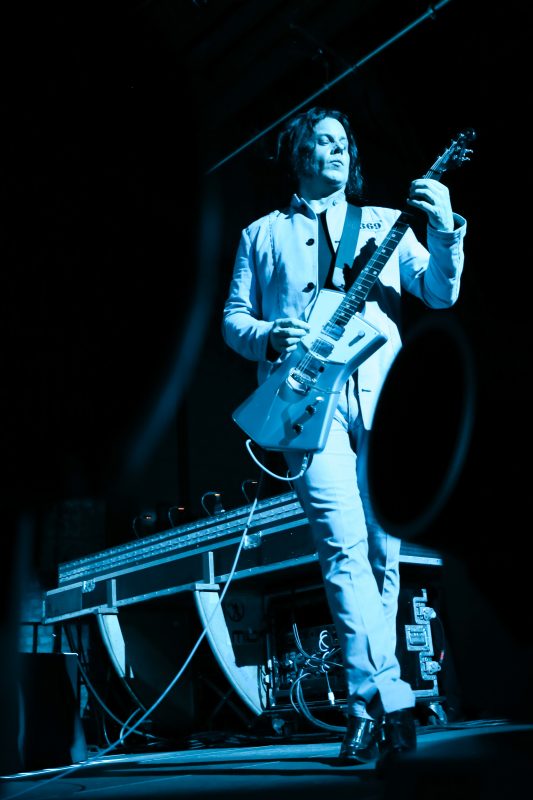 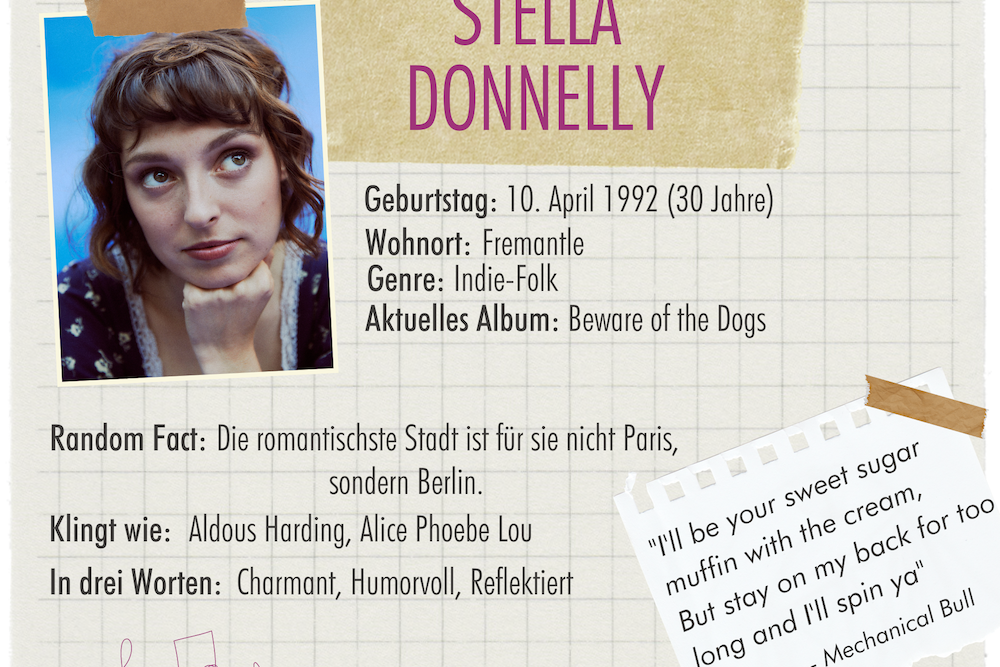 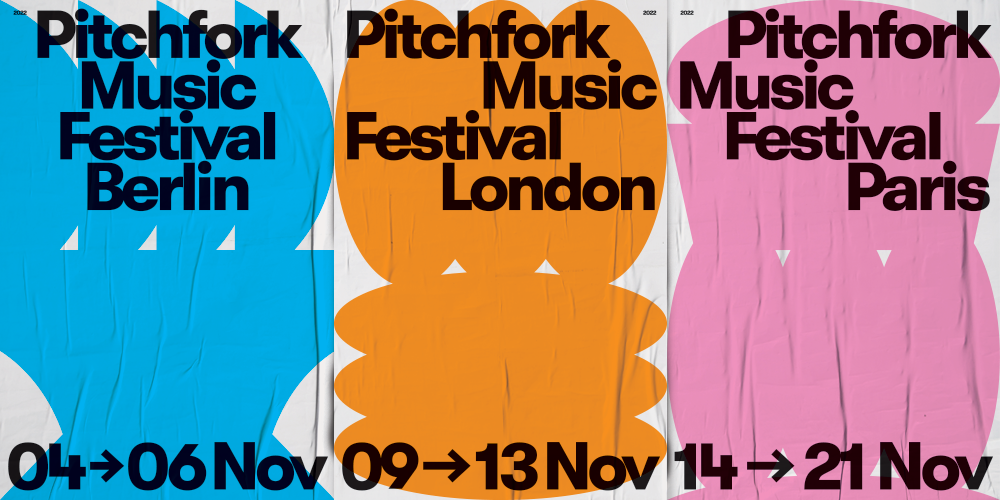 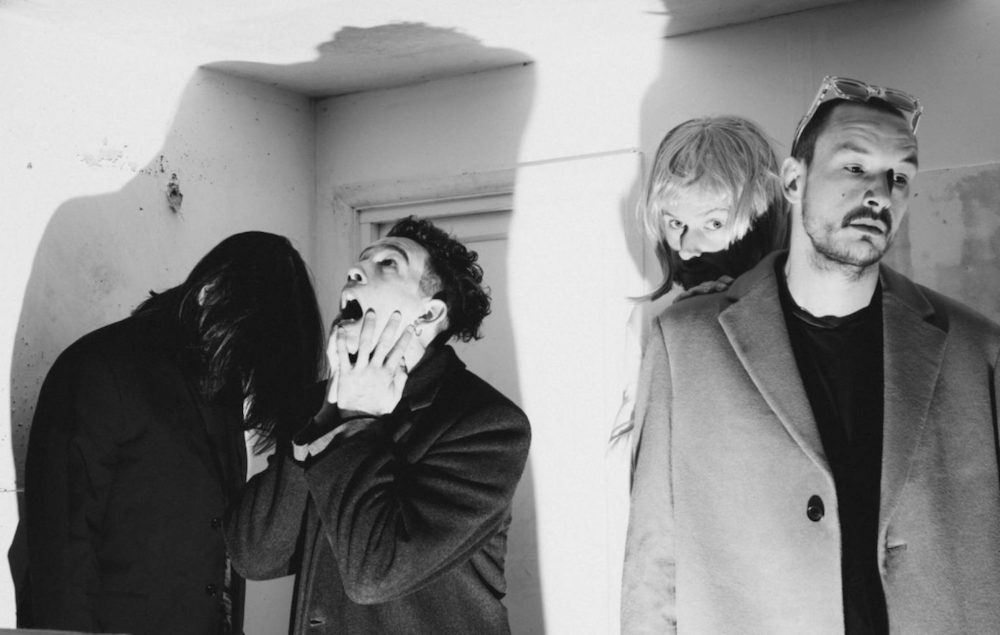 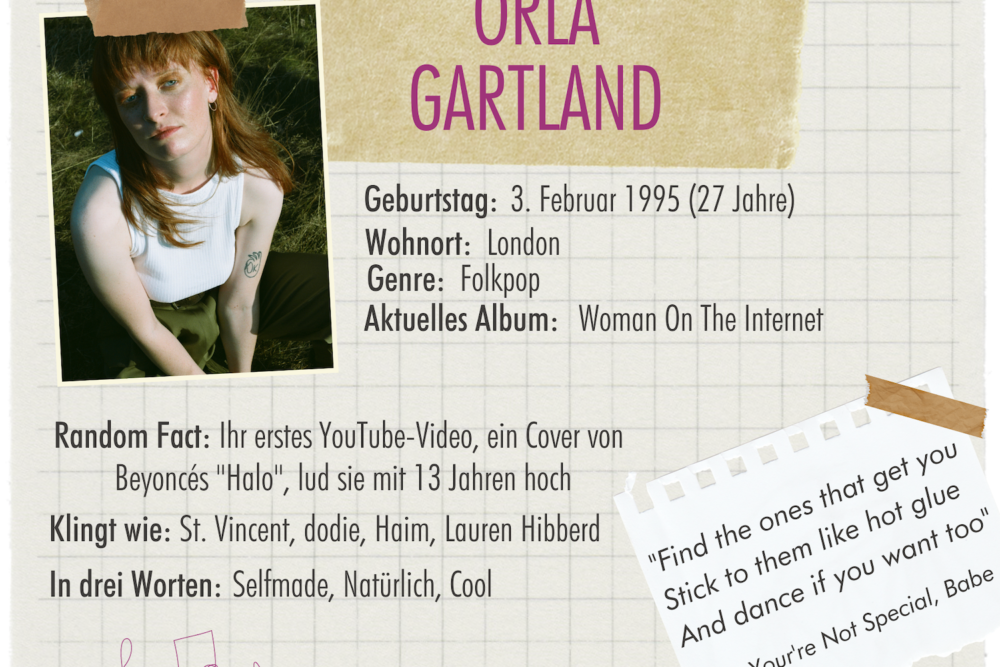